Most database systems support multiple isolation levels that enable their users to trade off exposure to various types of application anomalies and bugs for (potentially small) increases in potential transaction concurrency. For decades, the highest level of “bug-free correctness” offered by commercial database systems was “SERIALIZABLE” isolation in which the database system runs transactions in parallel, but in a way that is equivalent to as if they were running one after the other. This isolation level was considered “perfect” because it enabled users that write code on top of a database system to avoid having to reason about bugs that could arise due to concurrency. As long as particular transaction code is correct in the sense that if nothing else is running at the same time, the transaction will take the current database state from one correct state to another correct state (where “correct” is defined as not violating any semantics of an application), then serializable isolation will guarantee that the presence of concurrently running transactions will not cause any kind of race conditions that could allow the database to get to an incorrect state.

In other words, serializable isolation generally allows an application developer to avoid having to reason about concurrency, and only focus on making single-threaded code correct.

What Does “Serializable” Mean in a Distributed/Replicated System?

We defined “serializable isolation” above as a guarantee that even though a database system is allowed to run transactions in parallel, the final result is equivalent to as if they were running one after the other. In a replicated system, this guarantee must be strengthened in order to avoid the anomalies that would only occur at lower levels of isolation in non-replicated systems. For example, let’s say that the balance of Alice’s checking account ($50) is replicated so that the same value is stored in data centers in Europe and the United States. Many systems do not replicate data synchronously over such large distances. Rather, a transaction will complete at one region first, and its update to the database system may be replicated afterwards. If a withdrawal of $20 is made concurrently in the United States and Europe, the old balance is read ($50) in both places, $20 is removed from it, and the new balance ($30) is written back in both places and replicated to the other data center. This final balance is clearly incorrect ---- it should be $10 --- and was caused by concurrently executing transactions. But the truth is, the same outcome could happen if the transactions were serial (one after the other) as long as the replication is not included as part of the transaction (but rather happens afterwards).

Therefore, a concurrency bug results despite equivalence to a serial order.

Rony Attar, Phil Bernstein, and Nathan Goodman expanded the concept of serializability in 1984 to define correctness in the context of replicated systems. The basic idea is that all the replicas of a data item behave like a single logical data item. When we say that a concurrent execution of transactions is “equivalent to processing them in a particular serial order”, this implies that whenever a data item is read, the value returned will be the most recent write to that data item by a previous transaction in the (equivalent) serial order --- no matter which copy was written by that write. In this context “most recent write” means the write by the closest (previous) transaction in that serial order. In our example above, either the withdrawal in Europe or the withdrawal in the US will be ordered first in the equivalent serial order. Whichever transaction is second --- when it reads the balance --- it must read the value written by the first transaction. Attar et. al. named this guarantee “one copy serializability” or “1SR”, because the isolation guarantee is equivalent to serializability in an unreplicated system with “one copy” of every data item.

In contrast, in distributed and replicated systems, it is far less trivial to guarantee a lack of time travel, and many systems allow some forms of time travel in their transaction processing behavior.

The next few sections describe some forms of time-travel anomalies that occur in distributed and/or replicated systems, and the types of application bugs that they may cause. All of these anomalies are possible under a system that only guarantees one-copy serializability. Therefore, vendors typically document which of these anomalies they do and do not allow, thereby potentially guaranteeing a level of correctness higher than one-copy serializability. At the end of this post, we will classify different correctness guarantees and which time-travel anomalies they allow. 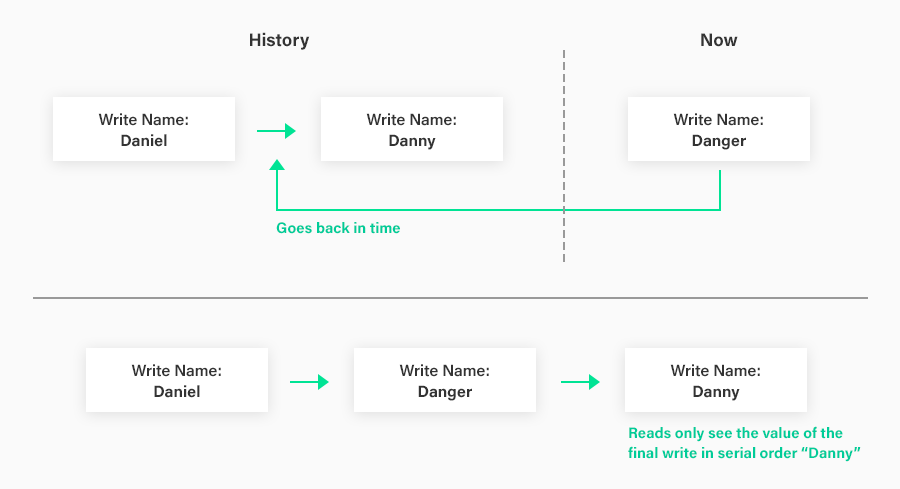 In multi-master asynchronously replicated database systems, where writes are allowed to occur at either replica, it is possible for conflicting writes to occur across the replicas. In such a scenario, it is tempting to leverage time travel to create an immortal blind write, which enables straightforward conflict resolution without violating the serializability guarantee.

The most common type of anomaly that appears in replicated systems but not in serializable single-server systems is the “stale read anomaly”. For example, Charlie has a bank account with $50 left in the account. He goes to an ATM and withdraws $50. Afterwards, he asks for a receipt with his current bank balance. The receipt (incorrectly) states that he has $50 left in his account (when, in actuality, he now has no money left). As a result, Charlie is left with an incorrect impression of how much money he has, and may make real life behavioral mistakes (for example, splurging on a new gadget) that he wouldn’t have done if he had the correct impression of the balance of his account. This anomaly happened as a result of a stale read: his account certainly used to have $50 in it. But when the ATM did a read request on the bank database to get his current balance, this read request did not reflect the write to his balance that happened a few seconds earlier when he withdrew money from his account.

Stale reads do not violate serializability. The system is simply time travelling the read transaction to a point in time in the equivalent serial order of transactions before the new writes to this data item occur. Therefore, asynchronously replicated database systems can allow stale reads without giving up its serializability (or even one-copy serializability) guarantee.

In a single-server system, there’s little motivation to read anything aside from the most recent value of a data item. In contrast, in a replicated system, network delays from synchronous replication are time-consuming and expensive. It is therefore tempting to do replication asynchronously, since reads can occur from asynchronous read-only replicas without violating serializability (as long as the replicated data becomes visible in the same order as the original).

In contrast to the stale read anomaly, the causal reverse anomaly can happen in any distributed database system and is independent of how replication is performed (synchronous or asynchronous). In the causal reverse anomaly, a later write which was caused by an earlier write, time-travels to a point in the serial order prior to the earlier write. In general, these two writes can be to totally different data items. Reads that occur in the serial order between these two writes may observe the “effect” without the “cause”, which can lead to application bugs.

In other words, if the bank example we’ve been discussing was implemented over a system that allows a causal reverse, the entity wishing to secure the loan could simply repeatedly make the loan request and then transfer money between accounts A and B until the causal reverse anomaly shows up, and the loan is approved. Obviously, a well-written application should be able to detect the repeated loan requests and prevent this hack from occurring. But in general, it is hard to predict all possible hacks and write defensive application code to prevent them. Furthermore, banks are not usually able to recruit elite application programmers, which leads to some mind-boggling vulnerabilities in real-world applications.

All the anomalies that we’ve discussed so far --- the immortal write, the stale read, and the causal reverse --- all exploit the permissibility of time travel in the serializability guarantee, and thereby introduce bugs in application code. To avoid these bugs, the system needs to guarantee that transactions are not allowed to travel in time, in addition to guaranteeing serializability. As we mentioned above, single-server systems generally make this time-travel guarantee without advertising it, since the implementation of this guarantee is trivial on a single-server. In distributed and replicated database systems, this additional guarantee of “no time travel” on top of the other serializability guarantees is non-trivial, but has nonetheless been accomplished by several systems such as FaunaDB/Calvin, FoundationDB, and Google Spanner.

This highest level of correctness is called strict serializability.